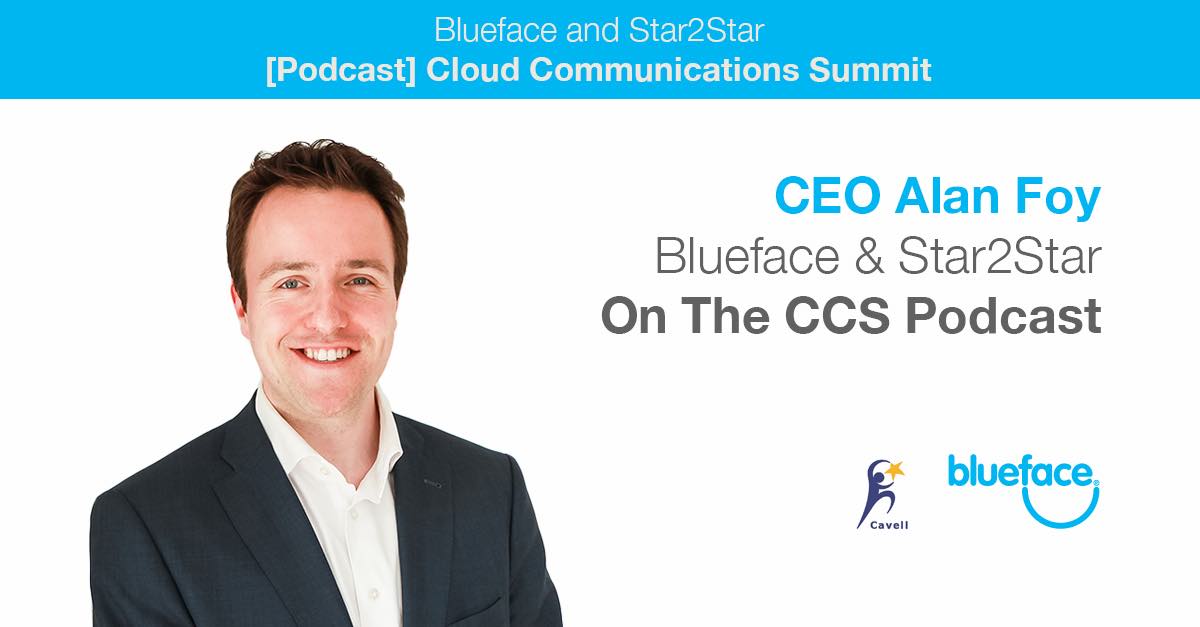 CEO of Blueface and Star2Star, Alan Foy sat down with the Cloud Communications Summit Podcast to discuss Unified Communications, collaboration and the future of voice. Listen to the engaging interview or read the transcript below.

Blueface and Star2Star merged on January 1 this year to form a global Unified Communications as a Service business. Together, we operate pure UCaaS hosted voice through to hosted with SD-wan. We have global data centres, an integration platform — it is a full spectrum solution.

Star2Star is prominent in North America – is 100% partner channel-focused organisation – and they have developed have a very early stage SD-Wan which they named “Hybrid Constellation”.

They have a very strong, active base of partners and channel resellers.

We operate a fully localisable, translatable UCaaS Platform. Blueface and Star2Star — have worked together for more than a year — merged in January 2018.

We came together in 2018 but had been working together for the guts of a year. We service the SMB but we have increasingly been working in the Enterprise space. We have also been working closely in the career wholesale space and we expect huge things from there.

Key Trends in the US & European Markets?

Blueface and Star2Star exist in the top five UCaaS-space in the United States of America with a growing indirect base in Asia. Looking at the US, Asia and Europe, SMB (sub-50 staff) is growing but has the slowest growth rate.

SMB exhibits 11% blended growth per year – at a sector level – but we’re seeing monumental growth in mid-market and enterprise. In the last year, in particular, we’ve seen a huge lift in enterprise. Depending on how you define enterprise — most would say 50+ seats.

Enterprises are realising “all of my other applications are on the cloud — why aren’t our unified communications and collaboration services?” This is driving unprecedented levels of adoption at enterprise level and I believe this will continue for a number of years.

From a market penetration point-of-view, cloud-adoption in the US is around 18-20% and in Europe, it’s around 15% and in Asia, it’s lower still. Very strong growth rates in AsiaPAC — double the growth rate of Europe and more mature than the North American market.

Each of the markets is at different stages of development. We would like to be able to enable and collaborate with fixed/mobile integration and intelligent routing and trying to build out an offering that suits their needs. We’ll have an interesting development by Q4 this year.

Collaboration is a checkbox — now you have to have it. We have invested in our iPaaS integration platform to encourage easier collaboration. An area lacking in attention is in the AI space, how it fuses with voice and how it augments the business process.

We’ll see more innovation around communication with intelligent automation of some customer experiences. How do you perform and transform certain elements of your organisation? The business ecosystem should inform UCaaS.

Blueface and Star2Star have a strong legacy of R&D, technology investment and focusing on our core product offering. We’re passionate — some might say obsessed — with product and this is both good and bad. R&D has given us versatility, we have focussed on building out differentiation It has given us an internationalisation and scalability that others cannot achieve.

We have always looked at the real-time full spectrum solution set and we believe that is a differentiator. This requires a huge investment. It is a business decision — you can license third-party or focus-on-the-latter, building in-house.

We have had quite a large amount of success – particularly in the last two years – in that service provider wholesale domain. We work with service providers to give them differentiation and control over their system, their destiny.

If you look at the marketplace, many providers were relying on one sole behemoth to a large extent, they cannot build and install that differentiation. We work with service providers to give them a customised differentiating factor.

For larger organisations — the behemoths — integrating this kind of feature would be difficult. We made this decision 7 – 10 years ago and it would be harder to make it now because the horse has bolted.

Star2Star’s early hybrid architecture was an early-stage SD-WAN which is part of the core offering in North America.

You mentioned mobile and collaboration. From an industry level, Blueface considers mobile carriers as the ones-to-watch in the Unified Communications space. We want to collaborate with these carriers and we’re doing a lot more around fixed-mobile integration, intelligent routing and trying to build out a product offering that suits that increase in use.

We will have a fairly interesting mobile development in Q4 this year or Q1 next year (2019). On the collaboration space, it’s a ship that is already moving. There is no real differentiation around collaboration. We have invested heavily in our iPaas integration.

An area that probably hasn’t gotten a lot of attention is the AI-space and how it fuses with voice and the business process. I think we’ll see a lot more innovation around core-enterprise business process where Unified Communications fits in that ecosystem and revolutionising that customer experience, overlaid content and taking that 360 view on your business applications.

How do you transform that process? And where do UCaaS other elements fit? These will be research questions for providers. It cannot be about single products, it is now about how everything works together and how we work together.

Everyone is trying to figure out what is Microsoft going to do — how will they address this market, will they become a telco, will they compete? Microsoft’s shaping strategy around this subject is definitely taking focus.

But I believe that the way we perceive competition today is going to change very quickly. We talk amongst ourselves as vendors and collaborators. You mentioned Twilio, who have taken their own market focus, leveraging their CPaaS offering — which Blueface and Star2Star have a less productised version — but in fairness, Twilio have developed an excellent strategy.

Right now, we feel like we understand our competitors in the Unified Communications space, this may not be the case.

These others, on the periphery of our capability but are edging closer to our market space. So we’re focused on becoming an enabler for these third-party companies. I think soon, we will have a bunch of other vendors and providers — many of whom we’re completely unaware of.

Blueface and Star2Star have the platform that we want them to leverage.

We have moved from an early-adopter cloud communications space to a far more mature space. Providers of other types of technologies on the edge of our market space are starting to play. We need to work, collaborate and entertain them when they come to town.