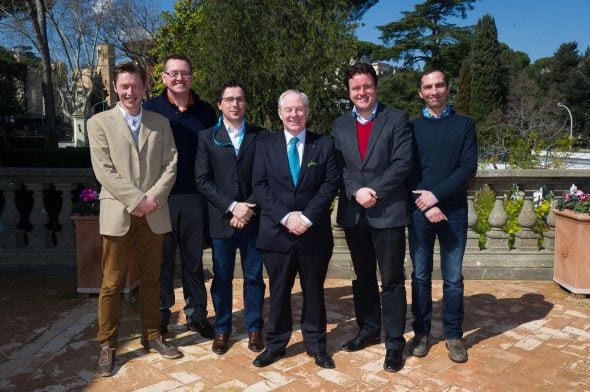 Photographed in Rome (from left): Feargal Brady, Brendan Gaffney and Luca Caralvi of Blueface; Michael Ring TD, Minister of State for Tourism and Sport; and Alan Foy and Nameer Kazzaz of Blueface.

We are very excited to have officially launched our Italian brand, Blueface Italia, at the Irish Ambassador’s residence in Rome, the Villa Spada, this weekend!

This morning we launched the brand with a brunch at the Villa Spada for key figures from the Italian technology and business sectors; before bringing the group to the RBS Six Nations match between Italy and Ireland at the Stadio Olympic in Rome! Unfortunately, it was not a great result for Ireland but the afternoon was enjoyable for our guests and it was a great opportunity to bring Irish business, culture and sport together.

Today’s launch follows Blueface’s acquisition of Italian brand Kebu last November, which was part of the company’s long-term European growth strategy. Following the lead of Blueface in Ireland, Blueface Italia will provide cloud telephony services to SMEs and Large Enterprises throughout Italy. This is the first Blueface brand to be widely available to businesses outside of Ireland and represents an exciting step in the growth of the company.

Blueface Italia is based in Rome, with selected support and finance functions run from the company’s Dublin headquarters.