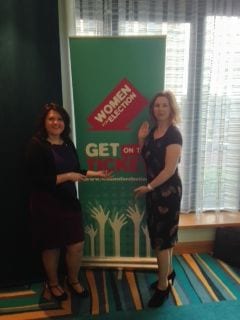 EQUIP, Ireland’s first political campaign school is not for the faint hearted. The programme schedule was non-stop, all to emulate a real life campaign environment. There were no leisurely lunches only 15 minutes to stretch and eat while working. After a full-on day, you were still not finished. No, after a long brain bursting day, you then worked with your team, comprising of aspiring candidates from across the political spectrum, on a creating a viable campaign strategy. No doubt about it, this was hard work.

Consistently, the participants at the campaign school, hosted by Women for Election, heard the core message that although Ireland had far to go in achieving the minimum 30% quota targets set, it didn’t mean it was an easy ride. In fact, based on the experiences shared, it would be quite the opposite. A running theme was horror stories of political life and why anyone would want to get involved in politics might remain a mystery for many. Until you remembered that politics was about change, creating positive change in society and that being part of the political system provided the vehicle to effect that change. Politicians with vision and heart are the leaders of the future and without heart you won’t be able to survive the rough and tumble of politics.

The EQUIP campaign school was designed to provide women with the tools they need to get elected and contributors included political journalists, campaign managers, media coaches and many more.  This immensely practical programme was made possible by Women for Election who are supported by Social Entreprenuers Ireland and Blueface. Blueface are really proud to support such innovation and positive change in Ireland.