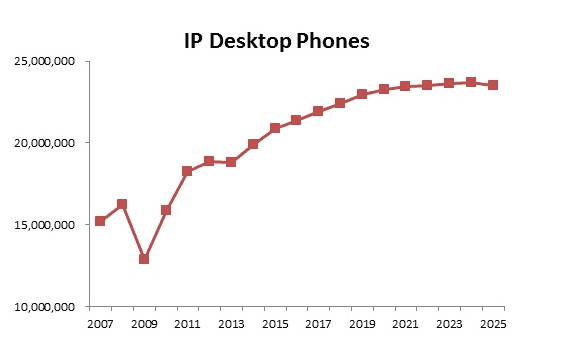 Over the past few years, there has been a common perception that IP desktop phones are on the verge of dying. Yes, it’s true that landline telephony is on the decline, VoIP ‘landline’ calls are on the rise. This assumption stems from people believing that landline telephony usage is on a rapid decline owing to increased fixed mobile substitution, yet this is not the case.

Our recent Blueface ICT surveys showed that majority (67.4%) of businesses currently subscribe to or have access to, both a landline and mobile telephony service. Only 13.4% reported use of landline only, with a slightly higher 15.7% using Mobile only. It is quite evident from these figures that an all mobile business is limited in its ability to project a corporate image and therefore, landline as an element of Business Telephony will certainly remain important.

An article from Telegeography provided many interesting insights into the main scenarios behind the growth of VoIP Handset.

Increase in VoIP based phone lines

Statements that refer to the “death of the PSTN” actually refer to the replacement of TDM (Time-division multiplexing/ circuit switched) technology in the telecommunication network by VoIP technology. The reason behind this is mostly due to cost-efficient programs rather than a new service development.

The study also suggests that the decline of phone lines is limited to 1.3% per year CAGR since 2008 – the year when the total number of wired phones lines peaked with 1.29 billion subscribers.

It is interesting to note that even though switched telephone lines have declined at a compound rate of 4% every year, VOIP consumers have increased by a whopping 18% annually, enabling to neutralize the decline in switched phone lines.

Over the last few years, residential landline voice traffic has decreased rapidly owing to an increase in mobile and VoIP to VoIP calling. However, this has not affected the number of phone lines which remains more or less stable.  According to Ofcom’s recent Communications Market Report, the number of fixed outgoing phone calls from residential phone lines has decreased with an 8.2% CAGR (Compound Annual Growth Rate) over the last five years.

With all the positive trending for IP desktop phones, there is no ignoring the fact that there is much more for the next generation to look forward to. Some of the major developments that would take over telephone communications are:

In our recent ICT survey, a high number of respondents (70.9%) said to be using computer-based telephony software (i.e. Skype, Google Talk, X-lite) for business purposes. This is a reflection of the growing expectations and demands on businesses IP connection. While it has not yet been used as a major mode of telecommunication by businesses, it is definitely gaining ground in the fiercely competitive telecoms industry.

Another area of major growth in the IP phone space is the IP Media Phones. According to Frost & Sullivan, IP media phones are advanced IP desktop phones which have large displays with either integrated or plugged cameras to enable video communication, as well as support advanced telephony,Unified Communication (UC) features and integrated business applications.

The IP media phone market shipped around 1.5 million devices in 2014 and this number is expected to quadruple in the next seven years. The main drivers behind moving to IP media phones are reduced costs and the need to switch to UC-enables devices.

With the cost of setting up a virtual PBX system (telephone system within a company or institution that switches calls between users on local lines whilst allowing all users to share a certain number of external PSTN phone lines) being extremely expensive, many businesses are making the move towards a hosted or IP PBX system.

The Hosted PBX handles voice signals using an IP connection and they carry out the same functions as a traditional PBX with many benefits such as reduced initial investment costs, increased flexibility, remote management and greater computer-technology integration. Our ICT survey revealed that 10% of respondents already used Hosted PBX, while 22% felt it would be useful for their business.

There is still a long time before we see the IP desktop phones being replaced on a large scale. Most of the major enterprise communication vendors experienced healthy growth in IP desktop phone shipments in 2014 and also invested in new ones including media phones, SIP phones, Microsoft-optimized/qualified devices and lower-end IP desktop phones.

To sum up, IP phones are not dead by any kind of measure and are here to stay with various offerings in terms of shapes, prices, integration and multimodal communications.