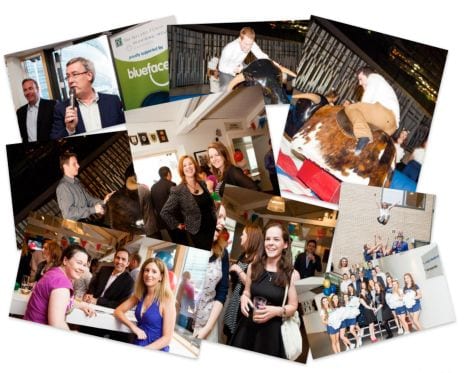 A terrific night was had by all at the Ireland Funds Young Leaders Tailgate, held to celebrate the American Football game between Notre Dame (Fighting Irish) and the US Naval Academy (Navy) on the 1st of September.

Guests were greeted by cheerleaders to get them into the party spirit, and were treated to an American-Style barbeque and cocktails courtesy of drinks-sponsor Jameson.

The Ireland Funds Young Leaders organized a fantastic raffle on the night and the Blueface crew was lucky with a total of 3 prizes among us!  After the raffle, plenty of entertainment was provided by the bucking-bronco, with a few brave Blueface representatives having a go. The record for longest time on the bucking bronco was claimed by our very own Juraj Kocurek with a respectable 19 seconds! The evening was topped off by a good ole team-boogie on the dancefloor, the very best kind of team building activity!

This event was sponsored by Blueface with all proceeds going to the Ireland Funds Young Leaders Promising Ireland campaign. Nearly €10,000 was raised on the night, which will go directly to supporting charities across Ireland as well as charities helping Irish communities abroad.