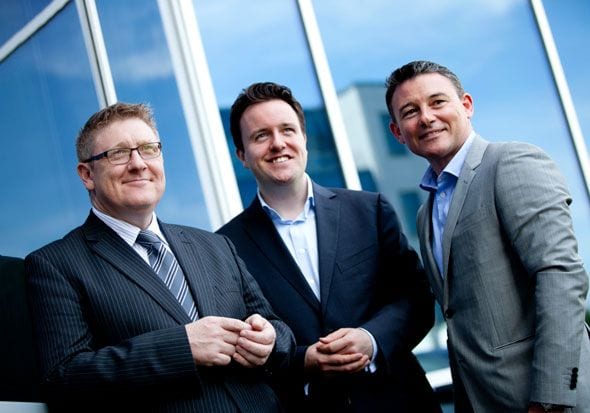 26, June 2014: Blueface, Ireland’s leading VoIP provider, today launched a new Point of Presence (PoP) data centre in partnership with Dell and TelecityGroup. This is the second data centre in the company’s portfolio, and its development means that Blueface joins an elite group of core telecommunications providers in Ireland offering full redundancy or back-up on its network, giving clients full peace of mind that they will receive continuity of service.

The PoP, which is located in TelecityGroup Data Centre, North West Business Park, was deployed using state of the art data centre infrastructure from Dell. Blueface invested €850,000 in the creation of the centre, making it a significant milestone in the company’s development and an important step in enabling the expansion of the business into the future.

Blueface operates an IP technology platform which was developed in Ireland and has been deployed successfully in over twelve countries worldwide. The move to create the second PoP was influenced by the company’s focus on providing corporate-grade solutions for Irish business users and the growing popularity and continued uptake of cloud telephony among these business clients.

The investment will offer complete reliability to Blueface customers with comprehensive failover capabilities. In addition, a second full point of interconnect means that Blueface can now guarantee network availability, even in the unlikely event of reduced capacity in one data centre.

The high level of capital investment in this project characterises it as one of the largest in Blueface’s history and demonstrates a clear commitment to customers in providing the highest quality of service, along with an enhanced user experience.

Speaking at the launch today, Alan Foy, Chief Executive Officer, Blueface, said,
We pride ourselves on providing a trusted service that continues to evolve in line with market demand. As a result, we continue to attract new business customers along with experiencing increased demand from existing customers. Our growing data centre requirements demonstrate this positive progression in Blueface’s growth and we are delighted to further develop our excellent relationship with the TelecityGroup, and to have the support of Dell in deploying state of the art technology for our second PoP.
Liam Halpin, General Manager, Dell Ireland said
We are delighted to have been involved in the engineering of this project with Blueface and indeed to host the launch of its new data centre, a significant development that will prove to be a touchstone in the history of this company.  Blueface is a great example of what Ireland’s technology sector has to offer on an international stage, and we are delighted that Dell’s technology will be integral to its operations as it seeks new opportunities both in Ireland and internationally. There can be no doubt that the future of Blueface is very bright and we at Dell look forward to continuing the relationship between our companies.Maurice Mortell, Vice President, Emerging Markets & Country Manager for Ireland at TelecityGroup, said,

Blueface is a technology driven, Internet-based company, delivering cutting edge and innovative solutions which enable businesses to work more efficiently.  We are delighted that Blueface has chosen Northwest Business Park as the data centre from which to scale its operations.  Blueface can look to the future, secure in the knowledge they can continue to rely on TelecityGroup, as they have throughout the past 10 years.

Necessary Always Enabled
Necessary cookies are absolutely essential for the website to function properly. This category only includes cookies that ensures basic functionalities and security features of the website. These cookies do not store any personal information.
Non-necessary
Any cookies that may not be particularly necessary for the website to function and is used specifically to collect user personal data via analytics, ads, other embedded contents are termed as non-necessary cookies. It is mandatory to procure user consent prior to running these cookies on your website.
SAVE & ACCEPT
English
English
Italian