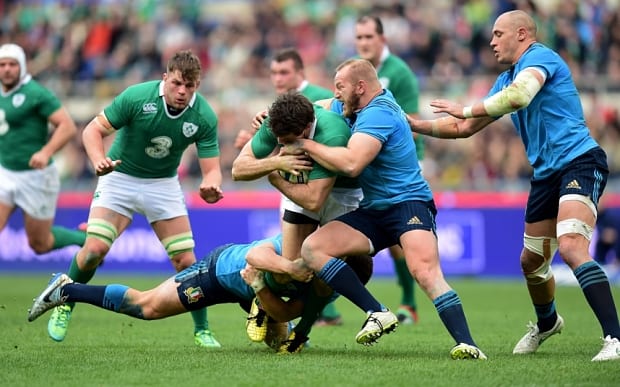 Last weekend was a spectacular one in Rome for Blueface; not only did it mark the begin of the Six Nations (Ireland vs Italy), but it meant that both the BF Italian and Irish offices were re-united again.

The Embassy of Ireland, along with Enterprise Ireland hosted a stunning networking lunch at Villa Spada before the match, with many other Irish and Italian companies, for an opportunity to explore mutual interests and business opportunities. After the lunch, we all headed off to the Stadio Olimpico – the main and largest sports facility of Rome, located within the Foro Italico sports complex, north of the city.

It was quickly clear who was supporting whom as we all arrived to the Stadium. The Irish turnout was phenomenal, and there was a great atmosphere running through the stadium. Blueface would have been happy with either team winning, but credit where credit due, Ireland were the stronger team in what was a game of attrition. At least the sun stayed out for most of the match, and of course afterwards we were treated to some amazing food and wine in Trastevere.

We would like to thank all the lovely people we met over the weekend, and a special thank you to Enterprise Ireland, the Embassy of Ireland, and Bord Bia for a fabulous event.

See below video of Ireland’s try!