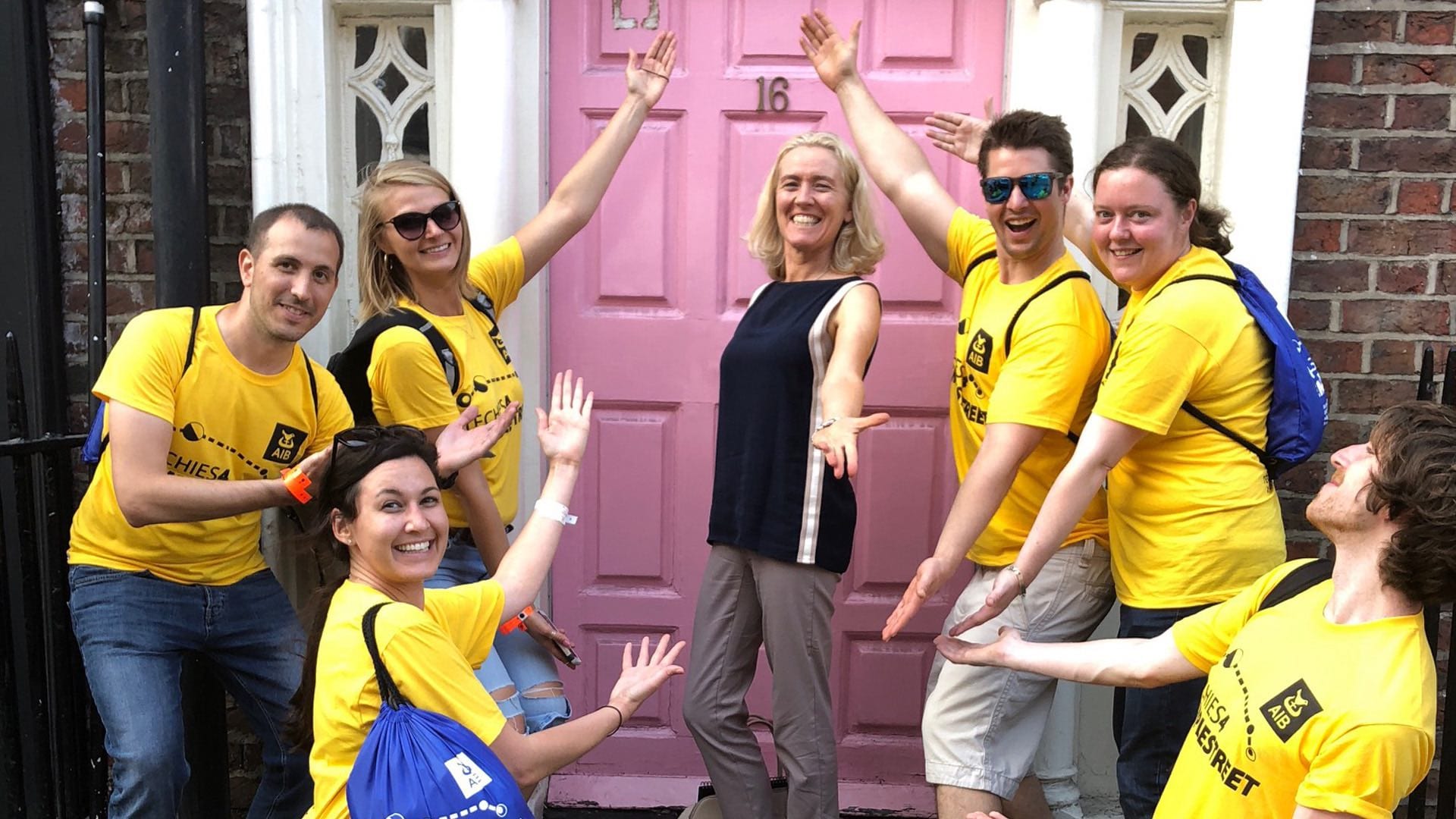 Blueface was delighted to roam the streets of Dublin, augmenting reality and hunting for treasure as part of Techies for Temple Street 2018.

The day started at the Aviva Stadium and after the Captain’s meeting and a short address from the Temple Street Foundation’s CEO and we were off.

Blueface Captain Colleen Gallagher was an excellent steward but we learned some lessons along the way. Let’s start with the obvious benefit of a team-based treasure hunt — team building.

Prior to the event, the staff at Blueface and the public shared their donations and wonderful, personal stories about their experience with Temple Street Children’s Hospital. On the day of the event, the buzz was palpable at the Aviva as everyone had begun strategizing while Team Captains were locked in a meeting.

The puzzles are so varied, a balanced team was essential. Creativity, charisma, general knowledge, selfie-skills (vanity), stamina and… binary was involved in the challenges that awaited Blueface’s crack team.
The Blueface Team
Colleen Gallagher (C), Kevin McGrath, Richie O’Connor, Cleo Connolly, Rachel Astheimer, Joe Roche (VC), Kamila Cholko, Jack Byrne, and Joel Barba.Everyone on the team was given a chance to show their wide and deep skills and from a professional point-of-view, get an understanding of one other.

The weather made for good spirits and the games and puzzles had teams putting their heads together, celebrating triumphs and cursing silly mistakes. In all seriousness though, bring a developer — that binary question had 7-out-of-8 of us feel very silly. Thank you, Joel!

Awareness for Temple Street Children’s Hospital was at an all-time high, with thousands of TSCUH-shirt clad professionals roaming the streets of Dublin in search of clues. The bright yellow shirts lined the Dublin landscape and culminated in a golden celebration at the Aviva.

While the primary goal of T4TS was raising awareness, it is vital to remain vigilant and alert for both clues and hazards (traffic, cyclists) on the course. As well as the points-boosting quizzes, a cypher needed to be solved using environmental clues and subtle wordplay tips.

While teams are scanning their surroundings for clues, it’s important to remember that time has not stopped while the game is on. Cars, bikes, pedestrians are getting on with their day — be mindful when you’re out hunting!

Oh and there are loads of spot prizes during the event, keep your ears open for big questions. Richie and I landed ourselves a dinner-for-two each, in completely different ways. Richie won a push-up contest, while I entered a burger bun eating contests that made him miserable.

So there we were. A mad dash, the bottom-of-the-ninth — inches away from the last note, the last clue and the final character for the cypher — when our leading phone died.

The game — similar to Nintendo’s Pokemon Go — requires a constant GPS connection for Augmented Reality (AR). It also demands a lot of camera work and in-app quizzes, so your battery will be strained throughout.

We were lucky to get reconnected in the nick-of-time (at 17:55, five minutes before the lock out) and complete the game, but there were many disappointed folks lamented lost battery. You can bring a portable charger, or have a designated back up but make sure you plan for an outage.

Aside from the brain-power exhibited by #T4TS competitors, cardio was the most understated attribute for the day. There were a couple of tired grumbles after the map revealed the distance that would be needed in order to complete the challenges.
Quick Caveat
Cars, taxis and everything else will not help. The route is fairly well planned. Cycling with your phone out is irresponsible and dangerous, so avoid that too.The heatwave also made for a tiring late-stage but as long as spirits are kept high (Captains, we’re looking at you), your team will be just fine.

Your tired legs and minds are rewarded with the final euphoria of a pint of Guinness / soft drink and banquet of food at the Aviva Stadium.

The festivities were excellent, packed full of food, drink and games (of Thrones at one stage) for everyone involved. Blueface finished the day with a group run up the Aviva stairs — a la Rocky — a task that left everyone completely drained but accomplished.

There were photo opportunities, parlour games and more! While there can only be one winner on the day, everyone was delighted to have helped Temple Street in some way.

On the topic of post-game celebrations, like most teams — now is not the time to rest on laurels. Temple Street is always in need of your support and donations.

Head on over to the Temple Street Foundation Website to learn more and support a noble cause. Don’t forget to enter your business in Techies for Temple Street next year, a superlative fundraising event.